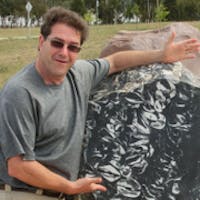 I began my career as a geologist, wandering remote dirt roads of the American Southwest. After a few years, my career metamorphosed into being a science educator, receiving clear credentials in science and math. I have been involved in education for almost three decades, during that time I have taught science and math throughout the Bay Area, and authored several articles for The Science Teacher, The Physics Teacher, several museum publications and a number of websites. For the past twenty of those years, I have been a science and technology educator at the Exploratorium Teacher Institute where I help disseminate content online as well as provide professional development for teachers from around the world. I have conducted workshops from India to Costa Rica and from Alaska to Australia.

I earned a B.S. in Earth Science from the University of California at Santa Cruz and a M.A. in Education from Columbia University. I have also served as a Wright Fellow at Tufts University's Wright Center for Innovation in Science Education.