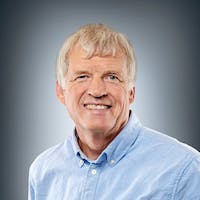 He works on dinosaurs, focusing on problems with growth and variation, the anatomy and relationships of carnivorous dinosaurs, and the origin of birds. He has a long-term goal of understanding the rich Cretaceous ecosystems of Dinosaur Park (Canada) and the Nemegt Formation of Mongolia.

He took his BSc from the University of Toronto (1972), and his MSc and PhD from McGill University in Montreal. He has been a Fellow of the Royal Society of Canada since 1999, and has an Honorary Doctorate of Laws (Calgary, 2008) and the Alberta Order of Excellence (2010).

Interested in dinosaurs since childhood, he finds that the excitement of discovery (fossils in the field, and ideas in the "lab") constantly renews his interest. Fieldwork connected with his research has been concentrated in Alberta, Antarctica, the Arctic, Argentina, British Columbia, China and Mongolia.

Since 1986, he has supervised or co-supervised more than 30 graduate students at the Universities of Alberta, Calgary, Saskatchewan, and Copenhagen.